August 22, 2022 — The City of Oakland Public Ethics Commission today announced the selection of Kellie Johnson as its new Executive Director. As Executive Director, Ms. Johnson will oversee the administration and enforcement of campaign finance, lobbying, transparency, and government ethics laws and will manage a staff of six. Ms. Johnson joined the Commission as Enforcement Chief in 2019. In that role, she led investigations, litigated violations, and executed administrative enforcement activities including two cases involving serious bribery and conflicts of interest charges that resulted in the largest ever fines for ethics violations in the Commission’s history. Ms. Johnson also initiated the Commission’s recently created Diversion Training Program as a tool to advance an alternate penalty approach focused on education opportunities that would benefit public servants, elected officials and other respondents.

Prior to joining the Commission, Ms. Johnson worked as Assistant Disciplinary Counsel with the Oregon State Bar investigating and enforcing ethics compliance by attorneys regulated by the State Bar. During that time, she was among the first three African American women to argue before the Oregon Supreme Court.

Ms. Johnson is a national, state, and local lecturer on criminal law, trial practice, and lawyer ethics to numerous bar associations, law enforcement agencies, and community groups. She is a former instructor for the National District Attorneys Association National Advocacy Center in South Carolina and was a presenter for the American Bar Association Center for Professional Responsibility. In 2007, Ms. Johnson was recognized with the Women of Excellence Social Justice award in 2007 and was the 2016 recipient of the Oregon Women Lawyers Judge Mercedes Diez Award, which annually recognizes an individual who has made an outstanding contribution to promoting minorities in the legal profession and in the community. In 2017 she was awarded the Distinguished Alumni Award from her alma mater, Humboldt State University.

“I am honored to be appointed as Executive Director,” said Ms. Johnson. “I am excited to lead the Commission’s talented and dedicated staff and I am grateful that the Commissioners have placed their trust in me.”

About the Public Ethics Commission 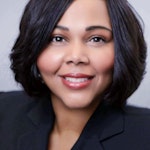